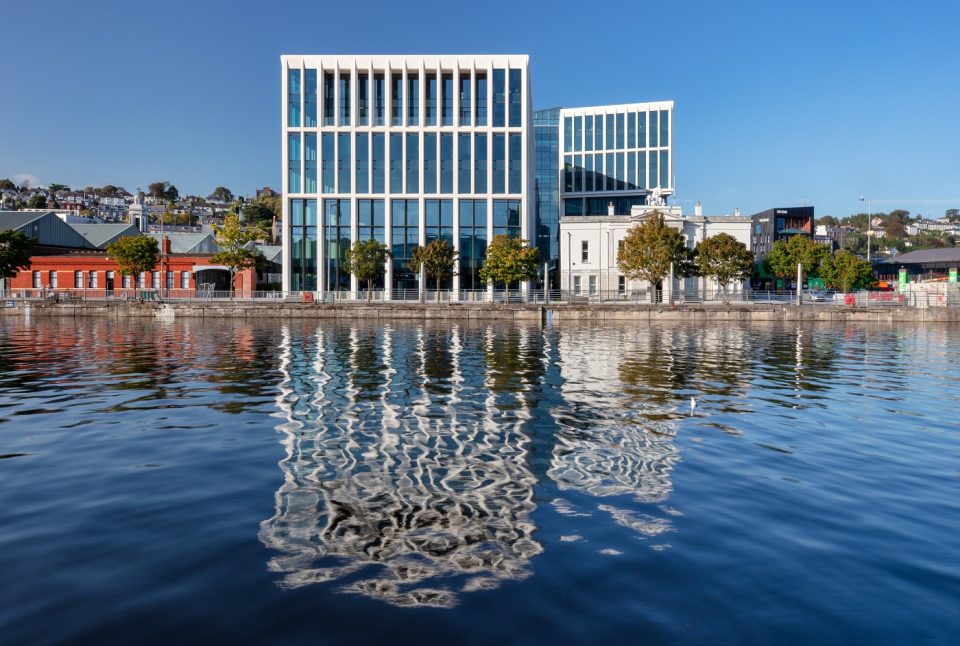 CORK TAKES THE HONOURS FOR BUILDING OF THE YEAR,  AND THERE COULD BE MORE GLORY IN STORE, WRITES CATHERINE SHANAHAN.

FRESH from its success in taking the top prize in a national architecture competition, Building of the Year, achingly hip Penrose Dock, is set to compete against the crème de la crème of international design in this year’s World Architecture News (WAN) awards.

Frank O’Mahony, lead architect on 250,000 sq ft €125m Penrose Dock, and managing director of Wilson Architecture, said they were “delighted with a win for Cork” as Dublin has tended to dominate in the awards category in the past.

“I think the building would stand on any world stage. John Cleary wanted something very classy, he wanted an international style building in Cork, that would attract international clients. It was a high bar to set, but it was a great thing to go for,” Mr O’Mahony said.

Speaking to the Irish Examiner, Mr O’Mahony revealed that the showstopping Sky Room at the top of Penrose Two, where a plate of mirrored metal in the ceiling picks up the reflection of the city and the nearby River Lee, was “almost an afterthought” that came about during construction, when they could see there was going to be a great space at the top level.

“People adore it, everyone wants to have their meetings in the Sky Room,” he said.

Wilson Architecture also fitted out the Penrose Dock offices, and among their clients was Israeli tech firm Varonis, with headquarters in New York, who asked that their offices on Floor 8 Penrose Two, be made look as “uncorporate” as possible.

Mr O’Mahony said a Varonis executive visited recently and said Penrose Dock was their “best office in the world”.

Mr O’Mahony said Penrose Dock, took two years from starting the design process to completion of the building, with about half a dozen of their employees working on it, including three architects and three CAD experts.

While Mr Cleary was putting the final bits of the site together, which fronts onto Penrose Quay, Wilson Architecture did a capacity study to see what kind of square footage was available to them.

“We decided on two separate buildings [Penrose One and Penrose Two] because it would be a nicer composition and a better floor space to attract tenants to,” Mr O’ Mahony said.

After considering a number of design options, they decided to take their lead from the classical design of Penrose House, the former home of the Cork Steam Packet Company, which, now beautifully restored, is a centrepiece of the new development.

They decided on a structure based on “very simple columns and beams” in a grid, with classically arranged proportions and with double height windows, two storeys high, which give the impression that there are less floors in the building than there actually are. Penrose One and Penrose Two are 10 and seven storeys high respectively. Penrose Two has a stunning nine-storey glazed atrium above a double height reception, allowing natural light flood down through the building’s core, with glass balconies running around the atrium at each floor level.

“The other idea was to create a couple of laneways and a plaza and John Cleary likes the connection with water, so the paving runs in curving lines, in complete contrast to the grid structure of the building,” Mr O’Mahony said.

The restoration of standalone Penrose House included the addition of a glazed entrance to the rear for access to a basement level gym. More importantly, it saw the re-arming of St George, whose sculpted figure adorns the top of the building, but whose dragon-slaying spear had been missing for a number of years.

“We got a steel bar made and put it back. It had always annoyed me that his spear was missing, so it’s there now and it makes it. That’s the level of detail that John Cleary goes to. The whole development is real quality.” The judges in the national awards competition remarked that they were particularly impressed with the building’s form, its overall design and the extensive attention to detail in its completion. Mr O’Mahony said he and Mr Cleary had made regular trips to London to see the standard of office accommodation needed to draw international tenants. Their research paid off, because almost 90% of its office space is now let, since it was completed in August last year. International tenants include Grant Thornton, Matheson, Sophos, Varonis, and Qualcomm The project also recently achieved Gold LEED accreditation and has features including electric charge point infrastructure for each of its 170 car parking spaces, an extensive shower and changing area and bicycle parking and repair area.

Mr O Mahony said their design “embraces the historical and urban setting” while the overall development has “set the bar in relation to the next phase of regeneration of Cork’s Docklands“.

Wilson Architecture also designed the Elysian, which Mr O’Mahony said he is particularly proud of.

“I see it driving in the Link Road to work and it looks as sharp as anything. I think it’s wearing very well.” He is also a fan of the iconic Shard building in London which he says is “very distinctive, very brave”. His favourite types of architecture are two “completely contrasting building types” he says: the Irish traditional farm building (white, black roof, red barn nearby), while he’s a “fierce fan of quality highrise”.

He is hopeful that Penrose Dock will do well in the upcoming WAN awards, where it’s been accepted as an entrant in the commercial waterfront category. Winners will be announced in July.

Mr Cleary described Penrose Dock, near Kent Station, as “a testament to the hard work of the entire project team including the architects, the design team and building contractor PJ Hegartys and the hundreds of hard working construction staff they had on site who delivered such a large complex project”.