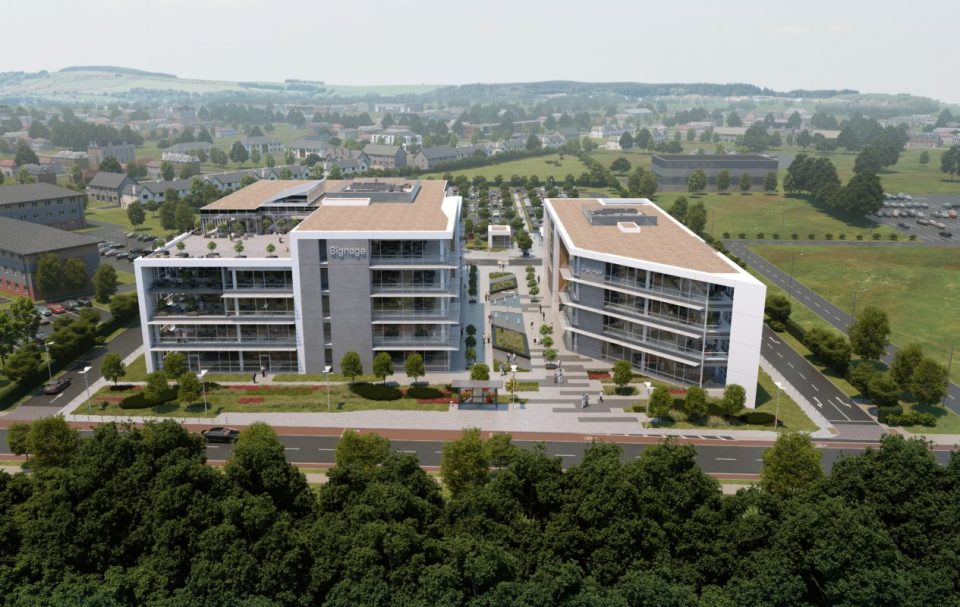 Construction underway by the JCD Group on a new office development in Mahon.

One of the largest suburban Cork office deals in recent years may see hundreds of new jobs at IT company Logitech, which has had a presence in Ireland since 1988 and is now on a strong growth trajectory.

The IT company has global revenues in excess of €5bn per annum and employs more than 6,600.

Logitech has had its Irish base in Cork for over 30 years and moved to the Cork Airport Business Park in 2013 where it has over 200 employees, with 50 new jobs already announced at the start of 2021.

Now, however, it appears poised for a far more significant jobs boost, with the company expected to announce its further plans for Cork around September. Logitech is to relocate to a new 46,000sq ft standalone officebuilding at suburban Mahon, at a new development called City Gate Plaza.

The building is expected to be completed by Summer 2022 by developers the JCD Group who previouslycompleted the City Gate and City Gate Park developments, totalling over 400,000sq ft. This new building, City Gate Plaza Two, will be capable of hosting about 400 employees for Logitech, and the Mahon site previously owned by MaCom also has planning for a further, far larger, 121,000sq ft building alongside.

Sources close to JCD Group — which has delivered over two million sq ft of commercial/retail space in Cork to date — indicate that the second phase of this project is expected to begin shortly, with “a number of potential occupiers showing interest”.

The company recently completed its 250,000sq ft Penrose Dock office scheme in two blocks in the city centre, next to Kent rail station and which is 90% let, and also sought a new planning for offices instead of apartments in what would be the city’s tallest office tower, 16 storeys, at the Sextant bar/Carey Tools site near City Hall.

Construction has just started on the former MaCom site for this first, angular building, called Plaza Two, which is set next to another major Cork employer, Voxpro, and is also alongside the Central Statistics Office campus, and the National Software Centre.

The Mahon site, vacated by MaCom, was acquired for c €4m by the JCD Group about seven years ago. Previous plans for it included a mix of offices and up to 200 apartments for Cork’s burgeoning IT employment base, but planning overtures were controversially rebuffed as the site was not zoned for residential use.

It comes after Apple did an initial deal for over 30,000sq ft of offices at the Horgans Quay site earlier this year in the BAM/Clarendon Properties development at over €30 psf, with an option of further space also open to Apple which employs 6,000 in Cork. Retail monolith Amazon and fitness firm Peloton are also currently in the hunt for new offices in the greater Cork area.

Logitech — with primary bases in Silicon Valley and Switzerland, and manufacturing in China — develops a range of peripherals among other activities and has revenues of over $5bn.

With its lease up at Cork Airport Business Park, it’s now set to expand into the next generation Gold LEED (leadership in energy and environmental design) certified 46,000sq ft JCD building at Mahon, to the latest sustainability standards, on a long-term lease.

Earlier this year, Logitech already confirmed new jobs in areas such as design, engineering, IT and supply chain functions.

Speaking earlier this year, Logitech’s president and CEO Bracken Darrell, said “as a company, we have a strong flexible working culture, with employees contributing to Logitech’s business from locations all over the world. Cork is a key link in that chain, and we’re keen to see more talent join our colleagues there.”

JCD Group ramps up delivery of logistics space in Cork