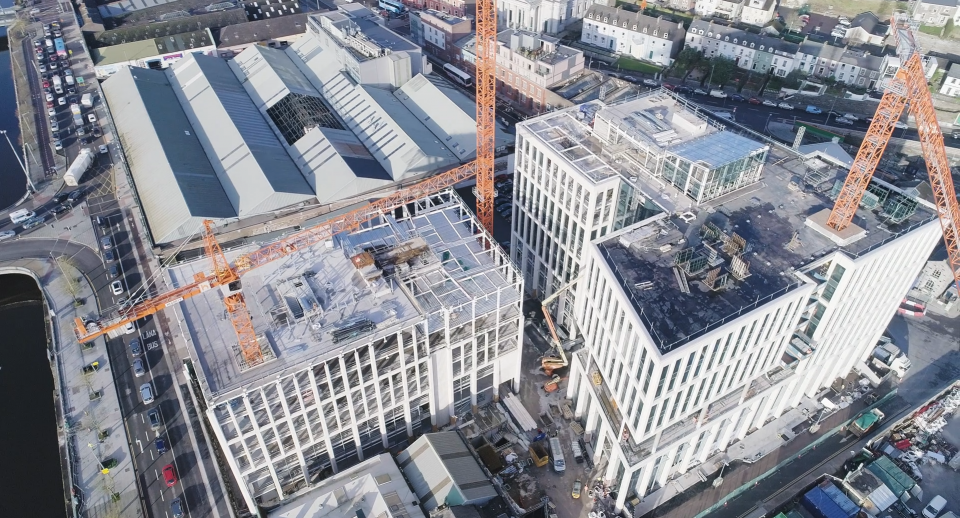 They said more than 60%, or 150,000sq ft, has now been reserved in the project, by Kent Rail Station, and the two blocks are capable of hosting 2,200 employees.

Confirmed this week as tenants are cybersecurity company Sophos, which employs 3,500 globally and which already has a Cork city profile, at City Quarter. Sophos was acquired last year in a €3.4bn takeover deal.

Again reflective of the strong cluster of cybersecurity expertise in Cork is Varonis, a data security company with an existing Cork foothold at the JCD Group-developed One Albert Quay, set now to move from the south to the north quays.

And, adding then to the mix is Matheson Law, a long-established Irish corporate law firm, which employs over 700 nationally. Matheson has six Irish offices and its Cork office has an expertise in and focus on the FDI sector.

Previously confirmed for Penrose Dock is financial services company Grant Thornton, who are vacating offices on Cork’s South Mall and taking a penthouse level in the new Grade A office development.

The buildings, across two blocks under construction by PJ Hegarty since October 2018, are now weathertight, and the third and final crane comes down later this month. Tenant fit-out is underway on 50,000 sq ft and companies begin moving in from June through to the end of the year. There’s also 28,00 sq ft of FlexiSpace, available on short leases, an on-site coffee shop, operated by Naturally Nourished, plus a new gym.

CEO of JCD Group John Cleary says: “The companies that have already committed to Penrose Dock offer a great mix of global technology and professional services. We have longstanding relationship with many of these and we are delighted to be part of their ongoing growth, by supplying office accommodation and amenities that assist them in attracting and retaining the best people.

“There is strong interest in the remaining space at Penrose Dock, and we look forward to confirming further occupants in the months ahead,” he added.

JCD Group ramps up delivery of logistics space in Cork